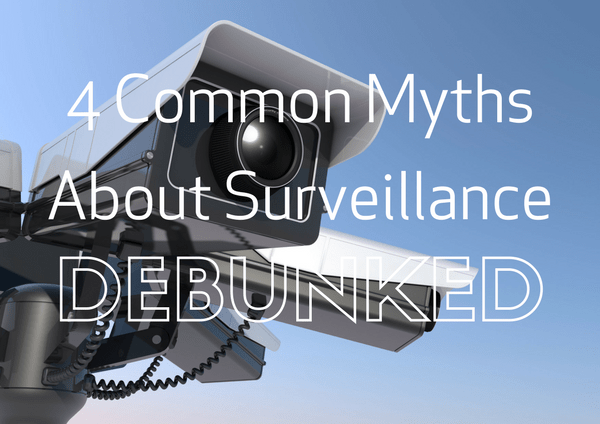 The video surveillance economy is expected to grow to $25 billion by 2018 as security managers at cities, airports and numerous other industries deal with a more challenging environment than ever before.

The popularity of video surveillance is also growing fast, driven not only by increasing security needs, but also due to a wide range of new advanced capabilities like license plate recognition, the ability to note temperature changes and a variety of new video analytics. Yet, despite the profusion of video surveillance cameras globally, they are still one of the most misunderstood products being sold in the physical security industry.

Simply put, there are still a lot of myths regarding what surveillance does and doesn’t do. We’ve compiled a list of those myths, along with the truths behind them:

It’s true that more pixels provide more detail in the captured video, but this only tells part of the story. High-megapixel count cameras are ideal for when it’s critically important to capture a higher level of detail, or when the camera view is extremely large (for example a parking lot), as the high pixel count supports good coverage over a larger area.

But there are many other factors that affect performance, including lighting, depth of field, camera positioning and more. In situations where lighting or camera location is less than optimal, you’ll need to look at other enhancements to adequately capture footage. And even if a megapixel camera is right for the situation, it must also be supported by a more robust network for transmission, and a larger storage system, which raises the operational costs.

The correct answer is that a camera with high pixel counts can be an exceptional solution, but only if it is part of a good system plan that takes the objectives and overall project factors into account.

Up until recently surveillance was primarily a reactive measure. After an incident occurred, security managers would check the video to find out what they could about what happened, and to ID the criminal if possible. Now, advanced analytics make proactive security a reality by analyzing video data and correlating it with information in other security and business systems to provide predictive analysis. In some situations alerts can be sent automatically to security personnel, helping to prevent an incident or stop a crime in progress.

Saying surveillance isn’t necessary because no crimes have been committed is like saying you don’t need health insurance because you haven’t gotten sick. The point is, you need surveillance before you have an incident, and installing surveillance cameras will help prevent some security issues from happening at all. But there are other benefits as well. For example, some retailers are happy to find that surveillance video that was intended for security can be very useful in slip-and-fall cases or other situations where video evidence helps solve problems.

There are still people out there who associate video surveillance cameras with being watched by “Big Brother”. However, there is also a growing understanding that surveillance helps to keep us all safe. And there are many other benefits to surveillance that sometimes go unnoticed or unappreciated. Sick of bumper-to-bumper traffic? Video analytics can identify traffic flow on a highway to help city planners figure out if new highways need to be added. Do you hate waiting for trains and busses? Loitering analytics can help identify where there are long lines so managers can react in real time.

As surveillance deployments continue to grow, so will the appreciation for their many benefits. But end-users, and the public at large, can only realize its potential once the facts are completely understood.

These are just some of the myths we encounter on a day-to-day basis. What are yours? Tell us by tweeting @Pelcovideo.